Be a Certified Productivity Specialist

Listening to the great ideas of your employee’s!!!!!

Listening to the Great Ideas of your Employees!!

On Tuesday, February 7, 2012, the Wall Street Journal wsj.com had a great article entitled, “Boeing Teams Speed Up 737 Output.”  The link for this article is:

By DAVID KESMODEL
RENTON, Wash.—As Boeing Co. strives to lift production of its best-selling 737 jetliner to meet surging airline demand, it is turning to workers like Jay Dohrmann to streamline work.
Mr. Dohrmann, a brawny, 46-year-old engineer at the 737 plant here, is part of an extensive effort the company has underway to rally employees for ways to make its jets more efficiently and avoid expanding its factories and its costs. These innovation teams are growing as Boeing seeks to increase output of the narrow-body, workhorse plane by as much as 71%. 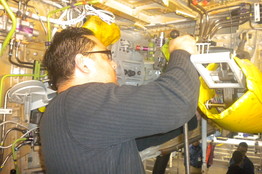 Workers try to leave few stones unturned. Mr. Dohrmann, for example, came up with the canvas wheel covers that now hug the four main landing-gear tires as the single-aisle planes advance down an assembly line. The covers solved a vexing problem: stray metal fasteners on the factory floor sometimes puncture tires.
The solution saves Boeing about $10,000 for each tire that needs to be replaced—roughly $250,000 a year at the Renton plant based on historical mishaps—as well as the labor costs involved in replacing them.
The idea, in place for about a year, occurred to Mr. Dohrmann as the avid sports fan watched a motorcycle race and noticed crews used special covers to warm up tires so they got a better grip on the track.
“It’s a good feeling,” the muscular engineer said of his fix. “You hated to see these airplanes jacked at the end of the line and people pulling off tires.”
Boeing started emphasizing employee-generated ideas in Renton in the late 1990s, when the 737 plant began adopting “lean” manufacturing techniques that were developed by the Japanese auto industry and embraced by U.S. car makers in the 1980s. Many companies, including fast-food giants, now use lean methods.

Last year, another team figured out how to rearrange their work space to prepare four engines at a time instead of three for attaching to a 737’s wings. A year earlier, paint shop workers revamped their work routines and cut 10 minutes to 15 minutes off each job per worker. A famous example that helped perpetuate the approach involves hay loaders, typically used for dumping bales of hay onto farm trucks. Years ago, Boeing employees suggested their use to load passenger seats onto jets, a practice it uses to this day.

Now, Boeing officials are forming more of these teams as they attempt to make big gains in production while keeping costs down. There are currently more than 1,300 across its commercial-jet programs.

Workers here recently boosted 737 output to 35 jets a month from 31.5, and Chicago-based Boeing aims to produce 42 planes a month in 2014. Executives said they are studying ways to eventually reach 60 a month as they plan a retooled version of the plane called the 737 Max, a jet that Boeing expects to begin delivering in 2017. The company is trying to pare an order backlog of some 3,700 jetliners, including about 2,300 of its best-selling 737s.
Boeing also is intensifying its scrutiny of its supply chain, hiring thousands of employees and providing more extensive training for new airplane mechanics as part of an effort to increase jet output without any major hitches.
Boeing’s employee teams are composed of workers with varying backgrounds-from mechanics to engineers-and tend to focus on a specific part of a jet, such as the galleys. Teams meet as often as once a week and typically have seven to 10 members.
“How do you produce more aircraft without expanding the building?” is the question Boeing managers in Renton continually focus on, said Eric Lindblad, vice president for 737 manufacturing operations. “Space is the forcing function that means you’ve gotta be creative.”
Boeing’s employee projects don’t all go smoothly. Some struggle to gain traction or take longer than teams envision.
When Mr. Dohrmann first worked with others to address the tire problem, he created several types of V-shaped sweepers that attached to the landing gear and were designed to push any bolts or other fasteners away as planes advanced on the moving assembly line. But fasteners kept slipping through.
“I was getting a lot of emails telling me that my sweeper wasn’t working,” he said.
Some employee projects take years to bear fruit. One group, for example, spent about five years on a new process for assembling the hydraulic tubes that go into the landing-gear wheel well of the 737.
Boeing workers used to crowd in the wheel well, installing roughly 650 individual tubes, a process that took up one day shift and part of the night shift for each jet. Employees in other roles had to work around the four day-shift mechanics. It was “a very delicately timed ballet,” said Buford Neal, a ponytailed team leader for the wheel-well installers
Mr. Neal was part of a roster of engineers, mechanics and other employees who figured out how to have about 25 assemblies of the tubes made at another Boeing plant.
Now, assembly line workers including mechanic Gabriel Holguin in Renton, Wash., install these larger pieces, along with fewer than 100 individual tubes, saving roughly 30 hours of mechanics’ time on each airplane. The new system, which took effect in 2010 but continues to be refined, also has substantially reduced the amount of hydraulic leaks its 737s have in service, Boeing officials said.
Boeing today takes about 11 days for the final assembly of jets at the Renton plant. That’s down from 22 days about a decade ago, but the company has for years set goals to go even lower. Mr. Lindblad said the company’s near-term goal is to whittle that number to nine days.
Write to David Kesmodel at david.kesmodel@wsj.com

This article by author David Kesmodel, provides a fascinating insight into what an employee idea or problem solution team can do when they are given the right opportunity and freedoms.  In my 37 years in productivity improvement, we always used a program which had a few differences to the one Kesmodel discusses above.  But fundamentally, they were the same.  The theory was to open a communications program which was available to first line supervisors and employees.  With this program, they suggested ideas and/or reported problems that they could find no solution to (or no one else had found solutions to and were frustrating them) and could probably improve productivity.  This program was ALWAYS  successful and the vast majority of the time produced very significant savings anywhere it was installed in the world.

Unlike your typical “Suggestion Box” Programs, which employees typically laughed at because no one ever normally got back to them about their ideas or problems, the crux of this program was a guaranteed response within 2 weeks of the receipt of the idea/problem/notice. Now certainly there were times that more time was needed to get proper information to resolve the issue, but specific detailed information as to what was causing the delays was always taken back to the initiator, so that the initiator always knew that they were not forgotten about.  A small constantly revolving committee of members of a steering group controlled the program and reported ONLY to the CEO or the equivalent position in the organization.  The members of this group were from a broad swath of departments and from the entire hierarchy of the organization from actual employees to people at a vice-president or similiar level.  The group size should never be much larger than 7 to 9 team members.  These people were constantly revolving, not all at once, but perhaps one or two every month, so knowledge was always on board, but a constant “change initiative” was brought on to keep challenging the team and keep forward momentum going.   These committee members never solved the problems they choose the best people in the organization to solve the problem or confirm that the idea was indeed a good or great idea.  In most cases, the client organization would make some kind of remuneration to the initiator for their idea or problem solution.

And the net result was the near always success of the program.  Do you remember some of the improvements from the WSJ article?  A 50% reduction in jet final assembly time from 22 days to 11 days.  If that isn’t savings to Boeing, I don’t know what is!!!

So if you and your organization do not have a strong hard working anti-bureaucratic program like this working in your company, then you aren’t getting the savings, the employee engagement and the increased productivity that your employees can bring to you, IF YOU WOULD GIVE THEM THE CHANCE.